What Is IP telephony? Definitions and Business Benefits 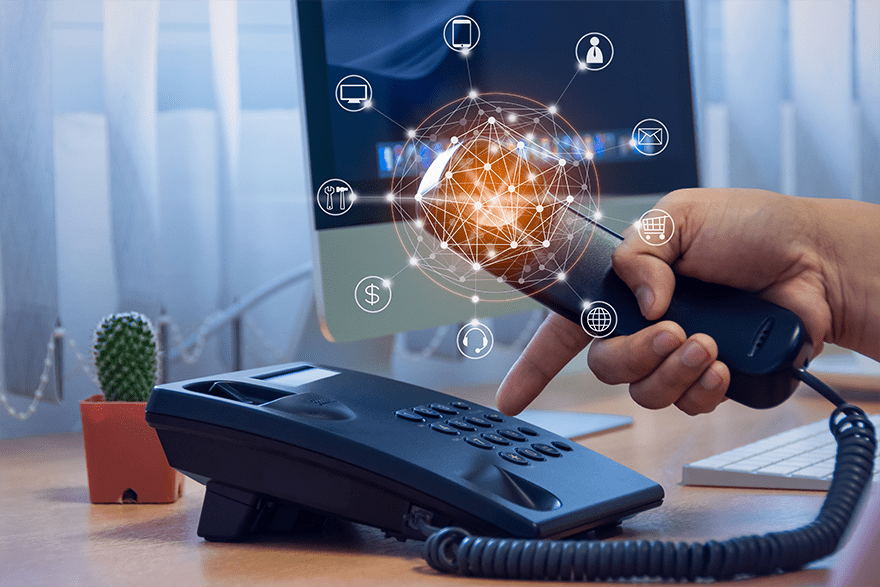 We used to hear about IPs all the time. IP address, IP scanner, even the famous IP man movie.

But what is the IP telephony system?

It’s a question that everyone asks! Okay, not really, but we are glad you did!

Unlike the long-lived telephones with wires that make calls as simple as dialing some numbers. IP telephony service, which stands for Internet Protocol telephony, had another opinion for making calls.

The term is used to address technologies that exchange voice information, for instance, over a Local Area Network (LAN) or the Internet, to avoid Public Switched Telephone Network (PSTN) costs.

Keep going for more about that below!

The IP telephony system was first introduced by VocalTec in 1995.

Still, compared to a normal phone system, the audio quality was so low that it didn’t by any means justify its expensiveness.

Ever since, the IP telephony services have been constantly improving to the point where telephony VoIP didn’t only offer significantly lower costs, but also better call quality and worldwide access.

IP vs VoIP: differences and definitions

Basically, there’s no difference, especially on a non-technical level. However, there’s a definition for each when it comes to the technical side.

Despite the subtle difference to the point that people often use both acronyms interchangeably, here’s the simplest and quickest breakdown for each term:

IP: standing for Internet Protocol, is a technology that is based on exchanging fax, voice, and other systems of data traffic communications via the internet.

On the other hand,

VoIP: standing for Voice over Internet Protocol, is more specific, as it refers only to the voice (phone calls) traffic that’s being sent across an IP network.

Conclusively, voice over IP telephony and IP telephony were both recently used as interchangeable terms, as they cover phone systems that are carried by being connected to the internet through a router or a modem.

There are multiple open-source protocols a VoIP counts on to transfer data from the service provider to the phone and vice versa.

These protocols offer different functions performed at once, other protocols execute functions only needed at specific and selected environments like concerts.

The VoIP has too many protocols, but the most common three are:

Additionally, H.323 protocol is one of the first VoIP protocols that spread universally.

With the development of upgraded protocols like the SIP protocol, H.323 protocol had major drawbacks, with limited long-haul network traffic carriage on top of them.

Additional note: the RTP protocol goes directly with the RTCP (real-time transport control protocol), as the RTCP helps with monitoring the statistics transferred by the RTP.

Ultimately, your best VoIP protocol depends on your provider and phone telephony system.

With 79% of American businesses using VoIP phones, here are your top reasons why to think of switching to VoIP the soonest:

Scalability has never been easier with IP telephones, as they are not limited by the number of physical phones.

Also, they can reach full potentials like call recording or advanced call routing. Furthermore, shall you ever need to add or remove a new IP phone, you can do so via the modem/router.

Effortless integrations for your business tools, including your CRM, are at your fingertip! All enhanced with the smoothest customer service solutions, at the lowest costs.

Configuring IP telephones doesn’t need a tech-savvy. Instead, basic knowledge of networks is more than enough to run the installation yourself.

Additionally, it is way cheaper compared to landline plans, as employees can benefit from unlimited yet cheap communications to carry their duties better than ever

What are you waiting for? Switch now to IP telephony solutions and save those monthly bills (up to 50%!)

With top-notch benefits within reach and multiple providers tailored to all needs, now is a more reasonable time than ever to seriously consider IP telephony systems.

Introduction The hospitality industry is constantly looking for ways to improve service, which is why we’re seeing more and more…

Powering The Future of Hotels Through Energy Management

Introduction The world's most beautiful hotels are known for their stunning views, luxurious amenities and exquisite service. However, the future…

Introduction Luxury is a term that can be defined in many ways. In the past, luxury was often associated with…

Don't get left out of the loop, make sure you subscribe to our newsletter below so you can be notified of our latest insights, tips, tutorials, sales and more!